Our third day in Berlin began productively, me and Lucy decided to go for a morning run. Even after two days in Berlin all of the streets looked the same, big and industrial. So I discovered a new skill of running whilst reading a map. Running through the crowded streets of Berlin wasn’t ideal, so we were thankful to find a quiet park to do a quick circuit in. Later to our, we discovered this park was, in fact, a mass grave for world war two victims. In which we had been doing situps, not our finest moment.

Back at the hostel when the others were up and ready we headed to the Holocaust memorial museum. I would recommend avoiding peak times as we queued for at least 30 minutes to get in. The museum was incredible it was interesting, distressing and deeply moving. Situated entirely underground, beneath the monument we visited on our first day, it gives off an eerie atmosphere. If you only have time to visit one museum whilst in Berlin this is the one I would choose. It told the history of the holocaust through thousands of individual lives, giving a harrowing personal touch. There is a room dedicated to the victim’s lives, it projects a different name and short biography of each victim. It takes 6 years continuously playing to get through them all. Safe to say that we were all very emotional by the end.

Leaving the museum we decided to lighten the mood by trying some traditional German currywurst. We were starving so went to the first place we found opposite the museum. This was a bad idea, it can only be described as German McDonald. We were presented with plastic plates and our sausages were very questionable. This was made harder to swallow by Beth immediately stating they looked exactly like penises.

We had just enough time before our appointment at the Reichstag, to quickly visit museum island. The buildings on museum island really are an architectural wonder. I wish we had longer to explore them all. They were slightly too expensive for our budget when Berlin had so many amazing museums. However, I believe you can buy a group pass to visit them all that helps to reduce the cost. One place we did have time to visit was the Bebelplatz and memorial to the burning of the books that took place. We didn’t really know what to expect from it and if you’re walking past then make sure to check it out, but I wouldn’t go out of your way. We then went to the chocolate shop that we had been passed on the walking tour Rausch Schokoladenhaus. If you’re looking for presents I would say this is a great place to get something. 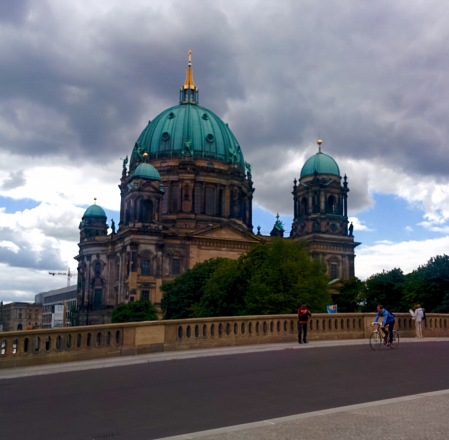 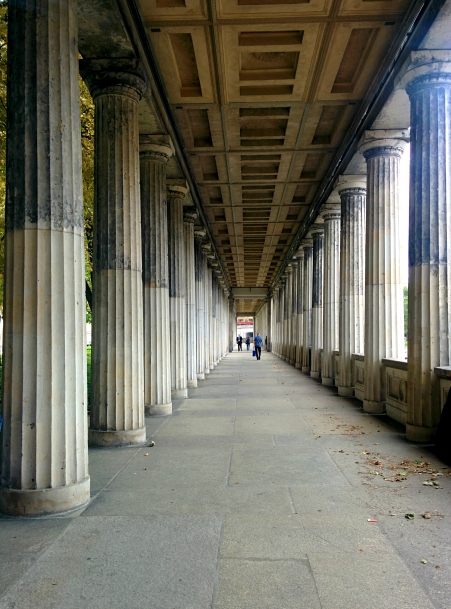 Still hungry after an unsatisfying lunch we found a nice ice cream shop and just had enough time to run back to the Reichstag. You can only go to the top of the Reichstag by appointment. Therefore I would recommend booking well in advance as in peak seasons it can get very busy, you need to take your passport too. 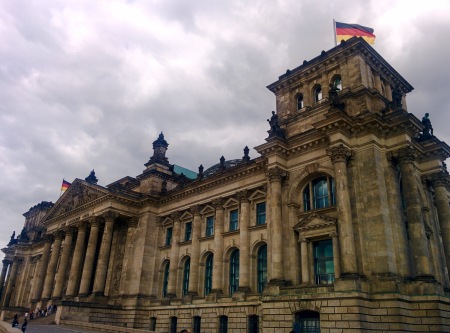 On arrival, we were greeted which a very strict screening process similar to airport security. Much to our amusement as we were putting our bags through Beth realised she had the end of a cucumber wrapped in tin foil in her bag. Which would have showed up an interesting shape on the scanner.

Throughout our time in Berlin Harrie and Lucy have been having a problem. They have been massively struggling to work out if people are male or female. They don’t mean it a bad way gender stereotyping way, just that the androgynous style in Berlin has them totally baffled. This has resulted in numerous funny situations for me and Beth, as we walk through the streets of Berlin and they argue between themselves. The most difficult case happened in the Reichstag as we were queuing for the lift to the top. I will admit this person was incredibly confusing as Harrie and Lucy becoming more and more frustrated trying to work it out. Resulting in Lucy loudly declaring ‘I just don’t understand, WHAT IS IT?!!!’

The Reichstag is certainly an interesting design, although the views from the top weren’t exactly mind-blowing. The audio tour was interesting and told lots about not only the design of the dome but about the sights of berlin as well. The toilets in the Reichstag were a very strange experience, we had to be called to a cubicle by a women who would then clean the toilet after you before allowing the next person in. Our confusion at this strange system resulted in us getting shouted at by a terrifying German women. Who for some bizarre reason then sent Harrie into the men’s, which she hadn’t done for anyone else.

The most hilarious moment of the day happened as we were leaving the Reichstag. An incredibly large woman wearing white jeans was walking along in front of us.  Beth and Lucy suddenly started staring in horror. Not sure what was going on I quickly discovered when as her top slowly rode up to reveal a huge poo stain in the middle of her white jeans. The entire group exiting the building started to realise. The worst part was her friend walking with her clearly knew the situation and hadn’t informed her.

Walking back to the hostel we had just enough time to make dinner and get ready for the bar crawl.  We had bought some pre-drinks from the supermarket, that was a very questionable version of WKD. Lucy and Beth opted for mojito flavour which in reality tasted like minted lamb.

We went with Sandeman’s the same company we went on the free walking tour with. It conveniently started opposite our hostel. The first bar like most bar crawls was a fairly awkward experience of a group of strangers sitting in groups staring at each other, making the most of the free drinks. After this we had an introduction to the bar crawl, the reps told us in a somewhat amusing if patronising manner, how to crossroads. Stating that the green man if your friend like him and walk with him, the red man we don’t like, he is a bastard. Whilst warning us to stay away from the prostitutes, which we did see a ridiculous amount, much to the amazement of Lucy who has never seen one before, like some mythical creature. The rest of the bars were far better than the first and everyone starting to chat amongst themselves. Throughout the evening we met some lovely Canadians and Australians. However, we also met some idiots, two horrendous Americans that expected us to fall at their feet after declaring they earn more than all of us combined. A rude Frenchman who after sitting down with us and realising we were English got up and walked off. I had an interesting chat with a Canadian who after half an hour still wouldn’t stop talking, until the moment he asked me my boyfriends name at which point he was left speechless, much to my amusement. The club we ended up in was actually really good, I believe it was called Matrix. As we walked in blurred lines happened to be playing, resulting in a synchronised forwards and backwards routine. That to our intoxicated minds was the best thing ever. There were four different rooms separated by archways, offering a variety of different music, something for everyone. Providing a not so proud moment for me and lucy, as we ended up having a slut drop competition to timber (although this greatly amused Beth). The biggest worry of any bar crawl in a foreign country is getting back to the hostel, luckily as we knew the club beforehand we could look up how to get home in advance and weren’t left wondering the streets of Berlin. The club was right next to the S Bahn and U Bahn station, which seem to run all night, providing what felt like a fast and safe way home. All in all the transport in Berlin is really excellent!