After our disastrous train journey from Berlin to Prague, we were well prepared and arrived at the train station with plenty of time to get a compartment on the train. The journey was just over 4 hours, so we were thrilled when we managed to get a four-seater table. I am still not overly impressed with European trains as it was delayed by twenty minutes. The main issue wasn’t the delay but rather the driver continuously apologising for it, which quickly became more annoying than the actual wait. However, the journey itself was beautiful and scenic, cutting straight through the mountains. The majority of the train were businessmen, so it was ideal for listening to my travel playlist, unwinding and soaking it all in.

Whilst we had expected the increased heat from Berlin to Prague (although it’s intensity had shocked us), the increase from Prague to Vienna was unexpected and even more extreme, stepping off the train into what felt like a sauna. We decided to save money and walk to the hostel rather than pay for the metro. We made it halfway when the heat and weight of our bags got the best of us. We scrambled around looking for whatever euros we could find and got the metro.
We were slightly confused, coming out of the metro station. We knew our hostel was next to the Naschmarkt, and we had been expecting a significant and impressive market square, which was nowhere to be found. In spite of this we managed to find our hostel. I would highly recommend the wombats hostel in Vienna. We could tell just from walking through the door this was the best hostel we had stayed at. It was huge and had everything you could need, from good wi-fi, comfy seats, lounge in the lobby, a giant dining room and busy bar with pool table.
Once again, we had gotten lucky and had a room to ourselves with two bunk beds and an en-suite. The heat was stifling so we were all very glad of the two small fans. Harrie, in particular, was pleased and proceeded to drag her mattress onto the floor to get better access to the fans. We declared this to be a fan bath.
After we had cooled down, we decided to go and find somewhere to eat. We walked around the area surrounding the hostel and found a lovely little Italian called salt and peppay. It did great traditional pizzas for a reasonable price, and we were happy to take advantage of the air conditioning.
Already from our short time waking around Vienna, the architecture and statues are astounding. Around every corner, there seems to be another impressive marble marvel. 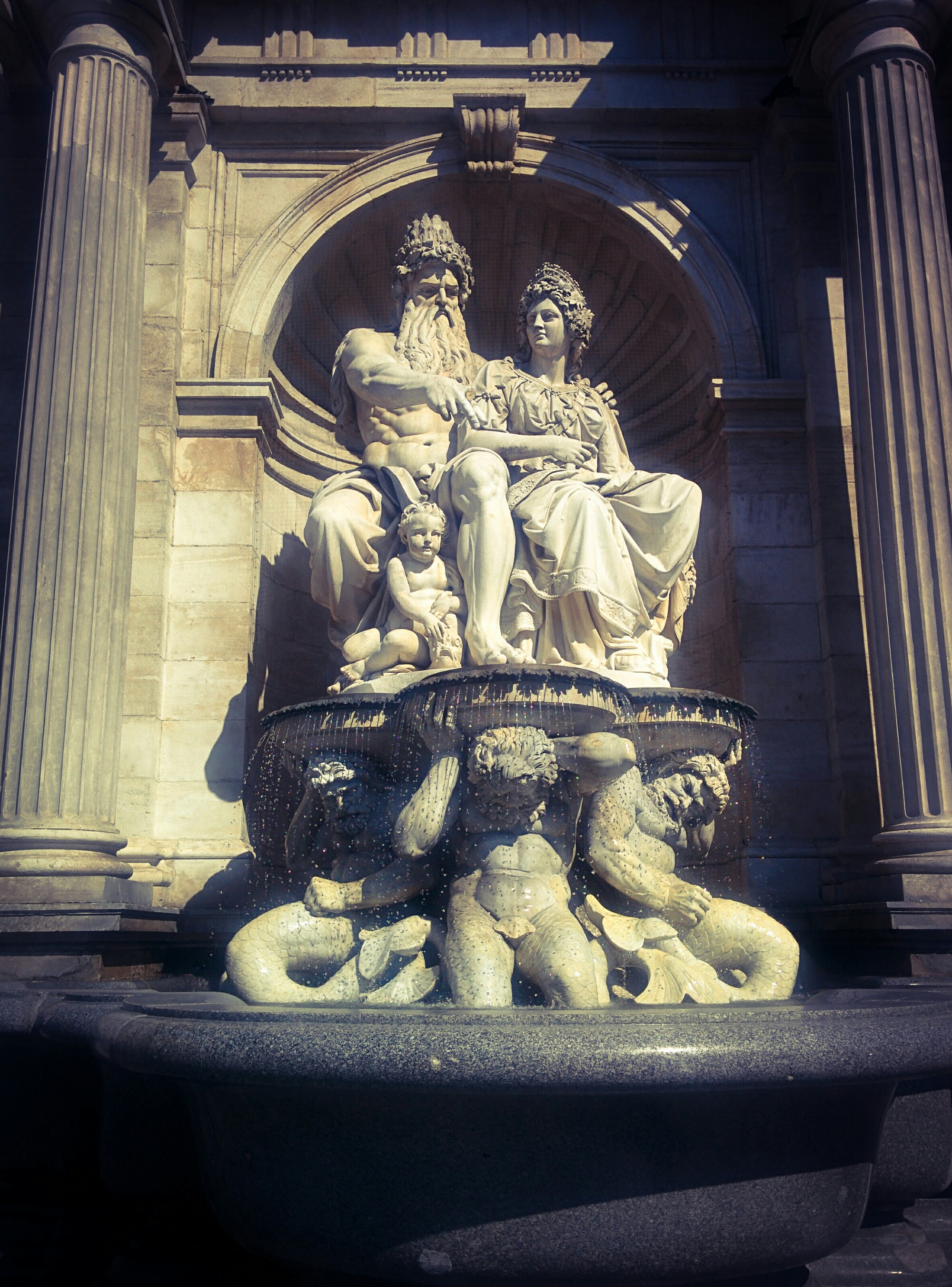 (Statue of Zeus)
I did notice something else whilst walking around, that all the traffic lights seem to be very different from English ones. When I initially pointed this out no one believed me until we found another set, the traffic lights are LGBT friendly, and various combinations of couples fell in love as the light turned green. We later googled it and found out if they had been left up from the Eurovision. I think all traffic lights should adopt a more exciting approach. 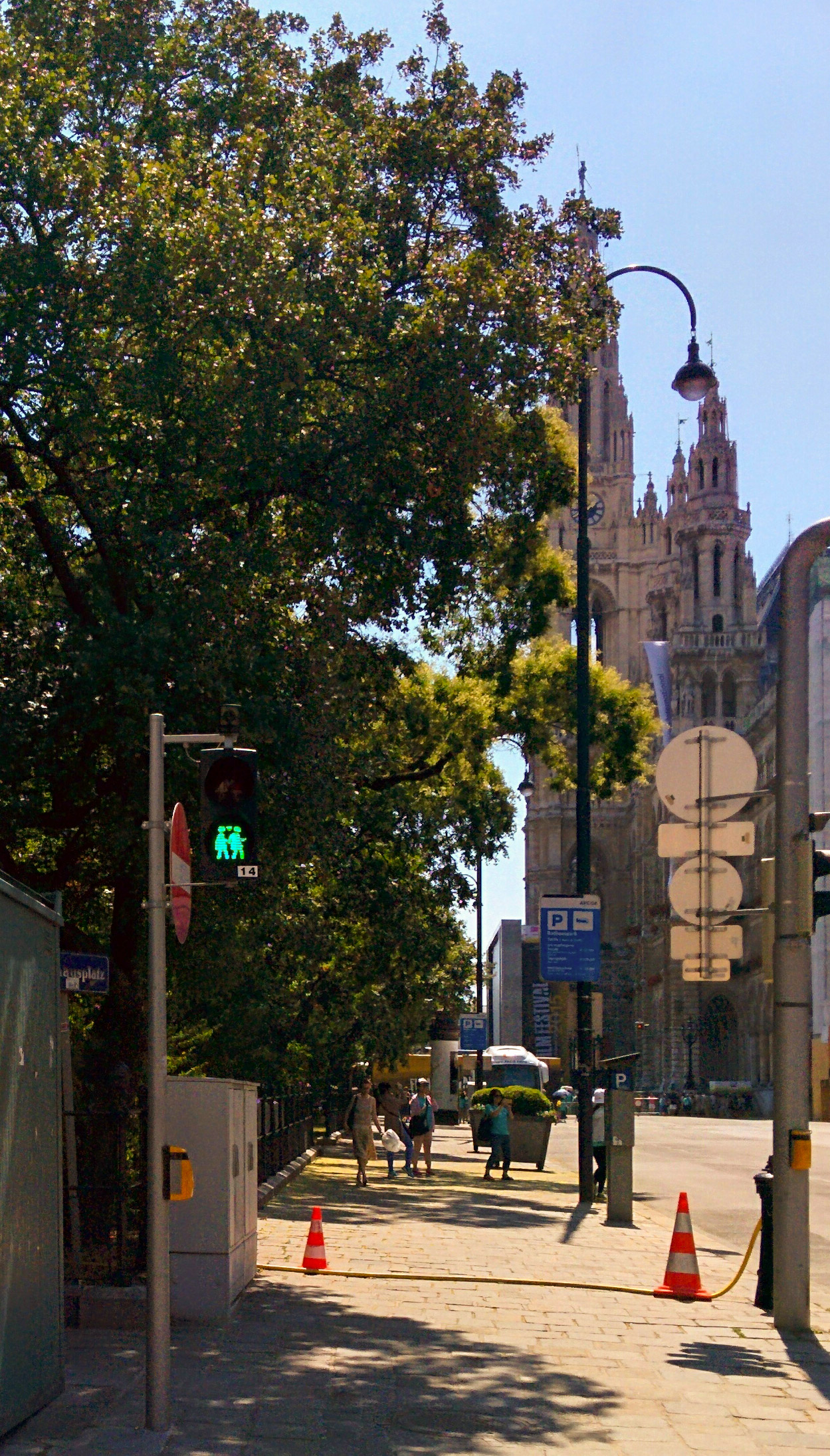 Exhausted from the heat and travelling we stayed in and had a couple of drinks at the hostel bar, and played a few half-hearted card games. We quickly decided to call it a night and make use of the first decent WiFi connection to skype home and catch up with everyone.