Keen to explore more of Budapest we began our second day by visiting parliament square to see up close the beautiful building, we had seen from a distance the previous day. The architecture really is something else, and the square is full of beautiful fountains. We arrived just in time to witness the changing of the guard, which, was more like a well-orchestrated dance. A large group of Japanese tourists were desperately trying to take selfies with the guards’ mid-dance, and the guards were trying hard to ignore them.

One of the things that I love about travelling is stumbling across something you had no idea existed and learning the history of a place you were previously unaware of.
We found ourselves wandering down a set of steps set to one side of the main square, which turned out to be a memorial museum for the horrific violence that happened in the square in 1956 during the Hungarian revolution. We had noticed that many of the buildings were bullet-ridden or still in the process of still being repaired, but we’re totally ignorant of this significant part of history and had assumed it was from world war 2. I would highly recommend a visit to this memorial as the entrance is free, and it explains the events that unfolded told through eyewitness accounts and the thousands of people that lost their lives.
Just a 15 minutes walk around the corner is St. Stephen’s Basilica, one of the main tourist attractions in Budapest and a beautiful building in its own right. It is surrounded by beautiful streets of fancy-looking restaurants that I wish we could have tired if we hadn’t been on such a tight budget.
Admission to the basilica is free; however, they do expect some donation. The inside was very impressive; however, having recently been in the Vatican, my expectations were very high. You do have to pay if you want to climb the tower and in the height of the tourist season, there can be long queues, so we chose to skip this part and contented ourselves with the inside.

Cramming so much history into the past two days, we decided to take a break and spend the rest of the day doing some shopping.

It was supposed to be a twenty-minute walk to the famous great market hall. However, we got lost and ended up taking a long stroll along the river banks but with the glorious views and fantastic weather we weren’t complaining.

We wandered through most of the shopping district looking for the Nike store for Lucy. After failing to find it, we stumbled upon what we assumed was the great market hall and we’re highly disappointed. Thankfully we had wandered into the wrong place and was just a small underground market.
Originally we intended to eat at the market, but after getting lost, we were starving. We decided to stip in one of the many restaurants we were passing.
We chose the next one we came across and once again enjoyed how fantastically cheap food in Budapest is.
Setting off again with clear directions we found the great market hall, slightly disappointed at it was under construction but after all the time we took to find it we were relieved it was open.
The market was fantastic, and we immediately regretted not waiting to eat here. I would advise making a trip here. The whole bottom floor was full of wonderful unusual food with a hefty emphasis on paprika. The entire place was filled with locals and tourists shopping, and the top-level had pretty much everything, from material, clothes, bags, jewellery and souvenirs.
If you’re looking for amazing food and cheap souvenirs, I would highly recommend a trip here. Just don’t make the same mistakes as us and eat before!
After not being able to find the Nike store earlier, we thought we would try the Westend shopping centre and continue our day of shopping. The centre was just a short metro ride back across town and gave us a chance to stock up on supplies.
If you’re looking for more commercial shops, then this is the place to go with all the recognisable brands you would expect.
However, we encountered a slight money issue whilst Lucy was trying to pay after changing into so many different currencies we’re still struggling to get our head around what was going on. A kind women came and basically took the money out of Lucy’s hands to do it for her. In future, I’m downloading a converter app.
After having a bit of a different afternoon, we just had enough time to get ready for the bar crawl in the evening. Something we had been the most excited to experience in Budapest was the famous ruin bars! I was thrilled to be celebrating my 21st birthday in Budapest and what better way than a bar crawl! I wish I could remember the company we decided to go with.
But it was a perfect experience minus having to try hard not to lose the tour guides.
All the ruin bars were exciting, at least the parts I can remember, and all had a different theme. It was a unique experience, and I think the bar crawl was a great way of actually finding them as many aren’t very obvious from the outside.

Along the way, we befriended a group of German guys and English girl and played a variety of drinking games. There’s nothing like a group of strangers singing you happy birthday as it turns midnight.
Ultimately we ended up in a cool club that I wish I knew the name of as I would definitely go back. 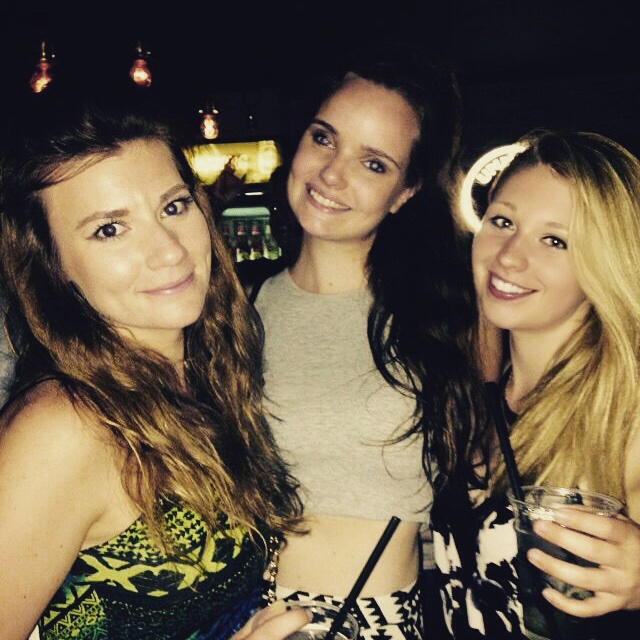 In the end, my least favourite thing about bar crawls are trying to get home when you have no idea where you are. We were wondering the streets of Budapest with no phone battery or map for two hours before we finally got back. I think my top tip here would always be to take a map and circle your hotel in case of emergency. However, we did find ourselves in a variety of hilarious situations trying to find our way home! All in all, the ruin bars in Budapest did not disappoint and are well worth the trip.