You don’t have to get on a plane or travel miles to have an adventure! No matter where you live there is always something to explore, for me the 40-minute drive to Whitby was long overdue. As an English literature graduate obsessed with the gothic, visiting Whitby abbey was high on my bucket list. For those of you who don’t know Whitby abbey is a momentous place in the gothic canon that inspired Bram Stoker to write a novel that redefined and popularised the entire genre, I’m talking about Dracula. Whitby itself is at the heart of the narrative, with Dracula first washing up on its stormy shore.

‘The valley is beautifully green, and it is so steep that when you are on the high land on either side you look right across it, unless you are near enough to see down. The houses of the old town–the side away from us, are all red-roofed, and seem piled up one over the other anyhow, like the pictures we see of Nuremberg. Right over the town is the ruin of Whitby Abbey, which was sacked by the Danes, and which is the scene of part of “Marmion,” where the girl was built up in the wall. It is a most noble ruin, of immense size, and full of beautiful and romantic bits. There is a legend that a white lady is seen in one of the windows. Between it and the town there is another church, the parish one, round which is a big graveyard, all full of tombstones. This is to my mind the nicest spot in Whitby, for it lies right over the town, and has a full view of the harbour and all up the bay to where the headland called Kettleness stretches out into the sea.It descends so steeply over the harbour that part of the bank has fallen away, and some of the graves have been destroyed.’ -Dracula

For me being able to walk around the town and famous points mentioned in the novel was so much fun. There is of course so much more that draws thousands of visitors to this picturesque seaside town. From its quaint village shops, afternoon tea, beach, pier and famous fish and chips, it has something to offer to everyone.

We began the day by parking up in Whitby bay and exploring the streets and shops. There’s everything you would expect from a quaint English town from bakeries to old fashioned sweet shops and of course lots of Dracula’ related merchandise.

The first point on my self lead Dracula tour was the 199 steps, an iconic feature in Whitby and in Stoker’s novel as the sight of Lucy’s first encounter with Dracula.

‘Then as the cloud passed I could see the ruins of the abbey coming into view, and as the edge of a narrow band of light as sharp as a sword-cut moved along, the church and churchyard became gradually visible. Whatever my expectation was, it was not disappointed, for there, on our favorite seat, the silver light of the moon struck a half-reclining figure,snowy white.

At the top is an eerie graveyard in the aforementioned quote. Its incredibly spooky even in the daylight and offers great views over both the bay and out to sea. 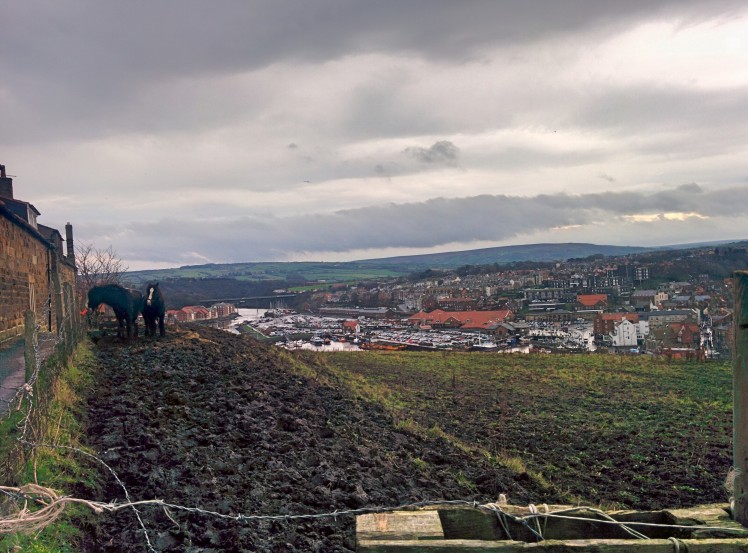 To get access to the Abbey you have to pay for the museum, for an adult, it’s £8.40 and for children £5.10. This may seem a little pricey however the museum is actually really interesting and includes a helpful audio guide. The history of the Abbey throughout the years is worth learning about as well and added even more to our trip. The Abbey stands out on the horizon and the landscape surrounding it is equally stunning.

As you walk around the grounds the audio tour gives provides various facts and stories depending on where you stand.

Whether you are a Dracula, history or photography fanatic this place is well worth visiting.

After a long day of exploring we were craving the traditional English seaside meal of fish and chip. We went to the famous Magpie Cafe which had a twenty-minute queue outside for a table. It was worth the wait to get some quality fish and chips!

Just before heading back we walked along the famous pier and looked back at Whitby lit up in the gloom. All in all a successful day trip!