Charleston was the first place we visited after our time working at camp ended. It was only a 3-hour drive away and gave us our first taste of independence. We spent four days relaxing in our beautiful Airbnb, cooking dinners, sitting on the balcony, drinking and most importantly exploring this historic city. It was the perfect place to begin our real USA adventure. Packed with character and steeped in history Charleston has something to offer everyone.

King Street is the place to be in Charleston. It’s a massive high street that runs through most of the city. It’s packed with bars, restaurants, vintage shops, parks and even an old school cinema. It’s exactly how I would picture a US town in a TV show, colourful buildings and all. (I have just found out while editing this King Street was used as the set of The Note Book, including the old cinema, no wonder it looked familiar) Where ever you stay in Charleston make sure you are in walking distance of King Street.

It’s safe to say we spent most of our time in Charleston on this one street and didn’t come close to running out of things to do. 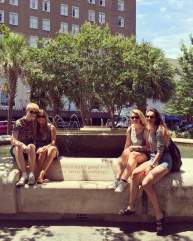 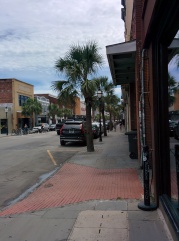 Anytime that wasn’t spent wandering down King Street we were at Folly Island. Folly Island is also known as ‘the edge of America’ for its peaceful and serene landscape. It’s only a 15-minute drive from Charleston centre to this quaint seaside town. You might even get to spot some alligators on the way driving through the marshland. Folly Beach is the highlight and it’s easy to see why its insanely white sand drew us in immediately. We spend most of our days sunbathing, admiring the luxury houses and wandering down the quaint seaside high street. It’s also a popular surfing hot spot and safe to swim, just remember to watch out for those riptides and sharks!

I could probably write an entire blog post about this place alone as it was a very mixed experience, but I will try and keep it short.  We planned a day trip to visit Magnolia Plantation & Gardens as it was listed as one of the top tourist attractions in Charleston.  I studied an American Literature module at university and knew a fair bit about the terrible history of plantations in the south detailed in both Harriet Jacobs and Fredrick Douglas Memoirs. I fully expected that as well as visiting the oldest public gardens in America it would be a harrowing, educational day as these plantations were built and maintained by slaves.

The driveway to the plantation was truly spectacular sweeping trees covered in Spanish moss looked like something straight out of a film. I don’t think we had quite realised until that moment just how big the grounds were. There is a staggering 158 hectares of land, that’s just under 64 full-sized football pitches. The gardens and swamp were really beautiful and packed with exotic plants, trees and incredible wildlife.  You can’t miss all of the signs saying beware alligators! (Not that any of us would have known what to do if we came across one) I also saw the biggest spider I have ever seen in my life. We spent hours wandering around the grounds, taking photos and getting lost. I can easily understand why as well as being the oldest garden in America it is voted the most beautiful. I’m not sure we would have managed to find our way back and eventually ended up being rescued by staff and brought inside as a massive storm was about to hit. 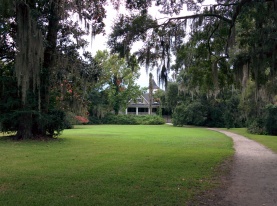 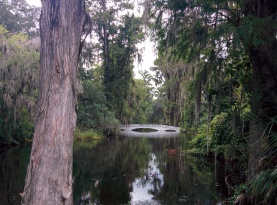 However when it came to the introduction video explaining the history of the plantation we were all very disappointed and disheartened. For one of the oldest plantations in the south, with a long history, they glazed over crucial aspects. While there were brief mentions of the civil war and a nod to a tour of the slave’s cabins, that was it. It seemed that rather than acknowledging their painful history and striving to educate future generations, they would rather brush over this and focus on the beauty of the place. It left us all feeling frustrated that this talk had been intentionally orchestrated to only include the positive. It completely overlooked the salves who had suffered being forced to create these beautiful gardens and wouldn’t even get their stories told. This was a common theme throughout our visit, there were hardly any mentions to slavery which seemed disgraceful and disrespectful. People should never be allowed to edit and omit history to make it more palatable or for the sake of a profit. The fact that this is also a very popular wedding venue astounds me and is in my opinion incredibly insulting. Because of all of this, I’m not sure I could recommend visiting despite its obvious beauty.

(Since visiting I’ve read more around this, apparently this is very common among tourist plantations in the South. They have been regularly accused of ‘whitewashing history’ and avoiding unsettling truths, the fact that this is allowed is ridiculous. These places should be trying to atone for their past and at a minimum providing an unbiased accurate history and focus on educating about racism.  I have also found out that Magnolia now also offers a Slavery to Freedom tour but that hardly seems like enough and I highly doubt they have changed their general introduction video which needs rewriting. So maybe read a bit more into this if you are thinking about visiting a plantation yourself.  I certainly won’t be returning)

Don’t let this put you off visiting Charleston as a whole it is a very welcoming and diverse city. It was the perfect place to start our adventure and get a feel for the real America both good and bad. Plus there is a reason it’s been used in so many films!